The Details and Chronology of the Impeachment 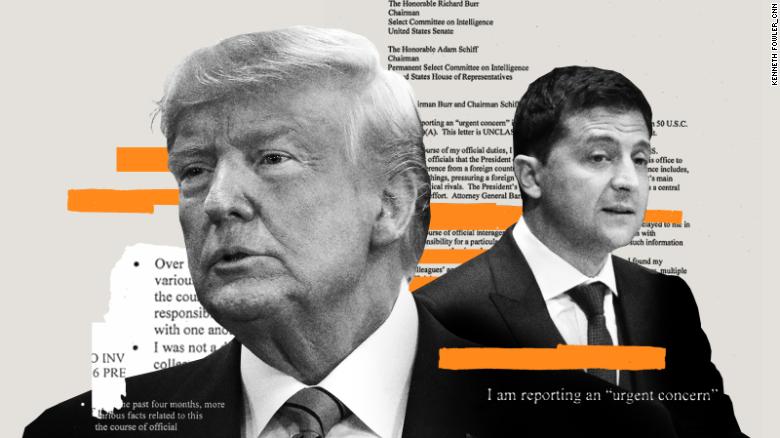 The Intelligence Committee of the US House of Representatives led by Congressman Adam Schiff questioned 12 witnesses, for about two month in both closed-door and public-hearing formats.

The cause for Donald Trump’s Impeachment was President’s phone conversation on July 25, 2019 with the newly elected President of Ukraine Volodymyr Zelensky. Details of the content of the conversation became known based on information provided by whistleblower on August 12,  which in particular said ‘’… I have received information from multiple U.S. Government officials that the President of the United States is using the power of his office to solicit interference from a foreign country in the 2020 U.S. election. This interference includes, among other things, pressuring a foreign country to investigate one of the President’s main domestic political rivals’’ particularly former Vice President and the USA presidential candidate Joe Biden and his son.

Prior to this phone call, the US had frozen $391 million in military aid to Ukraine, prompting to believe that Trump had used that money as an important lever to achieve his desired investigation. The investigation relates to an alleged corruption activity investigation of the Ukrainian energy company Burisma, a board member of which was Hunter Biden- the son of the former Vice President and currently Donald Trump’s main opponent for the 2020 election- Joe Biden. Later, Ukraine received $391 million in military assistance, which, as already mentioned, had been frozen.

Let us highlight the most important episodes of testimonies given in the Intelligence Committee.

US Ambassador to Ukraine Bill Taylor was the first to testify during public hearings. The latter had said in a closed-door hearing that during a phone conversation with US Ambassador to the EU, Gordon Sondland, Sondland told him how Trump had told him (Sondland) that he wanted President Zelensky to publicly announce that Ukraine would investigate Burisma and Ukraine’s alleged interference in the 2016 US Presidential election. In addition, the ambassador announced about the existence of an “informal channel” of US-Ukrainian relations. That channel includes the then-special envoy for Ukraine Kurt Vollker, Ambassador Sondland, US Secretary of Energy Rick Perry and Trump’s close adviser Rudy Giuliani. According to the allegations, these people themselves pushed forward the necessity of investigation in Ukraine.

During the public hearings, Ambassador Taylor made a remarkable statement that had an impact on the further course of the impeachment. The latter said that one of his staff members had told him about the incident, which took place on July 26, in particular that employee (later revealed to be David Holmes) was present at a meeting during which Ambassador Sondland called President Trump from a restaurant in the center of Kiev. During the call, an employee heard that Trump was asking Sondland about the investigations, and Sondland, in turn, responded that the Ukrainians were ready “to move forward”. In addition, in a conversation with the aforementioned staff member, Sondland said that Biden’s investigation was more important to Trump, for which Julian insisted.

When the identity of the staff member mentioned by the ambassador was finally revealed (David Holmes), he confirmed both during the closed-door and public hearings and provided details from the ambassador’s telephone conversation. In particular, Holmes said that in response to Trump’s question about whether he (referring to Zelensky) was going to conduct an investigation, Sondland responded positively, adding that Zelensky would do everything that Trump would say and confirmed that in the conversation with  Sondland the latter noted that Trump only cares about “big staff.” In response to Holmes’ specifying question of whether it was about the war with Russia, Sondland said no, it was about Biden’s investigation.

It is noteworthy that Ambassador Sondland’s testimony was expected to be more beneficial for Trump, especially given that Sondland was among those few who had donated $1 million to Trump’s Inaugural Committee. However, during the interrogation, Sondland actually stated that there was a “quid pro quo” (something for something in Latin). Such a qualification was added later by Sоndland, and while Trump had previously described him as “a great American”, following Sоndland’s change in the testimony, Trump said he “hardly knows the gentleman. ” At the same time, responding to a Republican congressman’s question as to whether Sondland had any testimony that tied President Trump to a scheme to withhold aid from Ukraine in exchange for those investigations, Sondland said that he had none other than his own presumption. Sondland also noted that “Everyone was in the loop’’  as for example Secretary of State Mike Pompeo. In addition, there was a reference to a phone conversation of September 9 between Trump and Sondland, when Sondland asked what the president wanted, and Trump replied that he wanted nothing, he did not want a “quid pro quo” and wanted Sondland to tell Zelensky ‘’to do the right thing’’.

One of the key witnesses was Fiona Hill, President Donald Trump’s former top adviser on Russia and Europe. Her testimony gives House investigators a window into former national security adviser John Bolton’s objections to Trump’s Ukraine activities. According to Hill’s testimony- Bolton told her that “Rudy Giuliani was a hand grenade who was going to blow everybody up.” Republican aides working on impeachment admitted that Hill was a damaging witness for Trump during her closed-door testimony. She would shed light on key conversations with Bolton, and had a front seat to the politics of diplomacy with Ukraine. Fiona Hill believes that Ukraine’s involvement in the 2016 US elections is a “fictional narrative” and disseminated by Russian security services. Hill mentioned in her testimony that she had a bit of a blow up while talking to ambassador Sondland and asked “Who put you in charge of Ukraine?” Sondland just answered “the president.” Fiona Hill was particularly angry because Sondland was not cooperating with them for his activity in Ukraine and Hill asserted that she “now actually realizes having listened to his deposition, that she was absolutely right, that he wasn’t coordinating with us because we weren’t doing the same thing that he was doing… Because he was being involved in a domestic political errand and we were being involved in national security foreign policy. And those two things had just diverged at this point.”

Another official who gave testimony was Lieutenant Colonel Alexander Vindman. During public hearings Vindman mentioned that he discussed the July 25th phone call with two individuals who were not from White House. Lieutenant Colonel Vindman noted that one of them was Deputy Assistant Secretary of State George Kent, who is responsible for European and Eurasian Affairs, including Ukraine. The other individual who was informed about July 25th phone conversation by the Lieutenant Colonel was from intelligence community. However, the intelligence community has 17 different agencies. Lieutenant Colonel Vindman refused to reveal where that individual worked, which was also intervened by House Intelligence Committee chair Adam Schiff, preventing Republican Attorney Goldman from continuing his question on that subject, as there was a need to protect the whistleblower.

Tim Morrison, Senior Director for Europe and Russia on the National Security Council, said in his testimony that on September 7 Ambassador Sondland informed him that the hold of Ukrainian military aid would be lifted when Zelensky announced an investigation into Biden’s and 2016 elections. Morrison noted that he had a ”sinking feeling” and reported his concerns to then-national security adviser John Bolton, who told him to notify White House lawyers.

United States former Special Representative for Ukraine Kurt Volker mentioned in his testimony that throughout that time, he understood that there was an important distinction between “Burisma” and “Biden”, and urged the Ukrainians to maintain such a distinction. He noted that he did not know that President Trump or others had conflated the investigation of possible Ukrainian corruption, with investigation of the former Vice President.

Following the investigation, the Intelligence Committee summarized all the findings in their report. Thus, President Trump is accused of pressuring Ukrainian President Zelensky to comply with his demand for an investigation, which became a prerequisite for providing military aid to Ukraine and for president Zelensky to have a meeting with Trump. In addition, Trump is accused of obstruction of Congress, namely his directions to the entire Executive branch not to testify in Congress. The report has already been approved by the Intelligence Committee with a 13-9 vote. The report was presented to the Judiciary Committee, which in turn drafted articles of impeachment. The committee held its first public hearing on Wednesday. For the first hearing of the Judiciary Committee four law professors from different American universities were invited to offer their views on how Trump’s actions can be qualified. Three of the 4 professors stated that Trump’s act was an impeachable one, and only one of them stated that there was insufficient evidence of violation of law by Trump.

Trump has been charged with two impeachment articles- one for abuse of power, and one for obstruction of Congress. Discussions and voting on the impeachment charges were due to take place on December 12, but the Democrats decided to postpone the vote until the morning of the 13th. This led to Republican outrage, with Congressman Collins saying that the delay was made to get more media attention. The vote took place on April 13, and as expected, the commission approved the charges against Trump.

President Trump continues to insist that the accusations made by the Democrats are not true. He reiterated his position in his letter to House Speaker Nancy Pelosi on the eve of the impeachment vote. In his letter, Trump first noted that “the impeachment represents an unprecedented and unconstitutional abuse of power by Democrat lawmakers and that you are declaring an open war on American Democracy.” According to the president, the whole process is done because the Democratic candidate lost 2016 presidential election, and the Democrats were unable to recover from that defeat. On December 18 (with only one day difference with Bill Clinton’s impeachment, which took place on December 19, 21 years ago), US President Donald Trump was impeached in the House of Representatives on two charges, the first of which (abuse of power) was voted for by 236 congressmen, 229 of which were Democrats. 197 congressmen were against, 195 of which were Republicans, 2-Democrats. 228 Democrats and 1 independent voted for the second article (obstruction of Congress), 195 Republicans and 3 Democrats voted against it. The Democrat congressmen who voted against were Jared Golden, Collin C. Peterson and Jeff Van Drew. Unlike the other two, Jared Golden voted only against the second article, about which he had previously notified, noting that although Trump’s opposition was a hindrance to the investigation, it did not reach the threshold of “high crimes and misdemeanors” that the Constitution demands. Congressman Jeff van Drew, who voted against the two impeachment articles, said he plans to change his party and join the Republican Party. And Congressman Peterson’s vote against the impeachment can also be attributed to the fact that he is the most conservative Democrat in Congress who had earlier stated that “without support from Senate Republicans, going down this path is a mistake”.։

Only one Congresswoman voted present- Tulsi Gabbard, who reasoned her vote by the fact that in her opinion ‘’President Trump is guilty of wrongdoing,” however, she also believed that ‘’removal of a sitting President must not be the culmination of a partisan process, fueled by tribal animosities that have so gravely divided our country.” At the same time, in one of his earlier interviews, the president stated that he wanted a trial. The reason for that is that the trial will be held in the Senate, where the Republican Party comprises the majority.  Republicans claim that the Democrats controlled the whole process of investigation in the House of Representatives, often preventing to invite some of the witnesses, who would speak about Bidens’ business activity in Ukraine, as well as Kiev’s alleged interference in the 2016 elections. The trial in the Senate will likely take place in January. However, the chances of impeaching Trump in the Senate will remain very low as long as Trump has the support of the overwhelming majority of the Republicans.