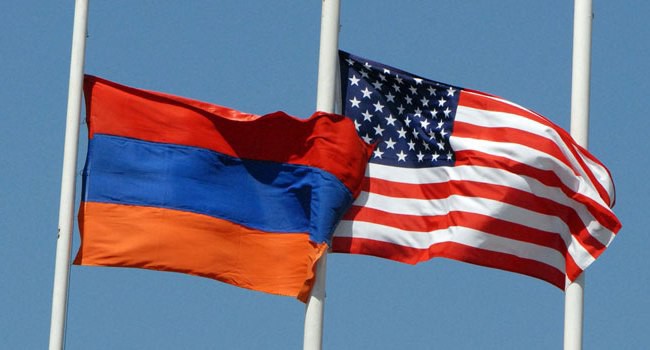 Our last informative-analytical work for 2019 is dedicated to Armenian-American relations, in particular bilateral visits. We have singled out top-level bilateral visits and bilateral meetings.

Now then, an indicator for the dynamics of the development of US-Armenia relations following the change of power in Armenia in 2018 is the bilateral visits  between Armenian and US officials and the level of the meetings. Obviously, the highest level meetings between two countries occur only in cases the parties have rich and important agenda issues to discuss in the political, economic and other spheres, or issues that deserve the attention of senior state officials and cannot be resolved in the lower levels. High level visits can also be of ceremonial nature. A vivid example of this is the visit of the US Secretary of the Treasury to Armenia on special assignment of US President Barack Obama to attend the 100th anniversary of the Armenian Genocide.

The highest-level meeting by now is the one between Armenian President Armen Sargsyan and US Secretary of State Mike Pompeo on June 29, 2018. Despite the high level of the visit, the latter should mainly be viewed in terms of Armen Sargsyan-Mike Pompeo personal relations. The strictly limited scope of the RA President’s constitutional powers in the field of foreign policy should also be taken into account. It is obvious that the meeting was mostly of ceremonial nature and it is not realistic to expect clear political arrangements. President Sargsyan’s next visit to the United States was in October of the same year, but no meetings were held with officials in power.

A key meeting between the executives can be considered U.S. President’s National Security Advisor John Bolton’s visit to Armenia. During the meeting Prime Minister Nikol Pashinyan received Bolton. A few months after the meeting, John Bolton and Pashinyan had a telephone conversation, concerning which Pashinyan noted that the Karabakh issue had not been discussed.

Prime Minister N. Pashinyan’s visit to the United States to attend the 74th Session of the UN General Assembly on September 21, 2019 can be considered a high level visit to the USA. During the visit, Prime Minister attended a rally in Grand Park in downtown Los Angeles and delivered a speech. The only present congressman was Adam Schiff, who attended the rally and delivered a speech, though prior to the rally Los Angeles Consul Armen Bayburdyan said in one of his interviews, that other congressmen had also been invited. Prime Minister Pashinyan had no meetings with President Trump, Vice President Pence, or Secretary of State Pompeo.

Still in 2018 RA First Deputy Prime Minister Ararat Mirzoyan paid a visit to the US, during which bilateral meetings were limited to several Democratic congressmen, as well as US Deputy Assistant Secretary of State for European and Eurasian Affairs Wess Mitchell.

Minister of Foreign Affairs Zohrab Mnatsakanyan didn’t met with his American counterpart-the Secretary of State Mike Pompeo during his visits to the USA. One of the key bilateral meetings of the Minister of Foreign Affairs Zohrab Mnatsakanyan took place on October 25, 2018 in Yerevan with the National Security Advisor of the US president John Bolton within the framework of the regional visit initiated by Bolton himself. Minister of Defence D. Tonoyan and Secretary of the Security Council A. Grigoryan also participated in the meeting. The meeting between John Bolton and Zohrab Mnatsakanyan in the USA took place on June 20, 2019 in Washington DC.  During this period working visits of the Foreign Minister have been limited to meetings with the Assistant Secretary of State for European and Eurasian Affairs Wess Mitchell, the Deputy Assistant Secretary of Defense Laura Cooper and the Deputy Assistant Secretary of State George Kent. The meeting with the latter was connected with the first session of US-Armenia Strategic Dialogue, where George Kent was the head of American delegation.

The focus of RA Defense Minister David Tonoyan’s visit to the United States was mainly on meetings with the Kansas state authorities, which is connected with the Partnership agreement signed between Kansas  National Guard and Ministry of Defense of RA. During his visit, Minister Tonoyan also met with US Assistant Secretary of State for European and Eurasian Affairs George Kent in New York.

During the visit of RA Secretary of Security Council Armen Grigoryan to the USA, his direct counterpart in the United States, then-National Security Advisor John Bolton didn’t receive him. The 2019 May visit to the USA was limited to meetings with Special Assistant to the President of the USA and Senior Director for European and Russian Affairs on the National Security Council of the USA Fiona Hill, who was to leave her office a few days after that meeting.

As for Prime Minister’s spouse- Anna Hakobyan’s visits to the United States, her 2019 April visit should be singled out, the pivotal aim of which was to raise money for the ‘’City of Smile’’ charitable foundation. In the framework of her visit to the United States, Anna Hakobyan also participated in a reception hosted in the US Congress. The reception was organized by Congressmen Anna Eshoo and Jackie Speier, and attended by Congressional Armenian Caucus Co-Chair Frank Pallone and Vice-Chair Adam Schiff, as well as Judy Chu, Katherine Clark, T.J. Cox, Jeff Fortenberry, Raja Krishnamoorthi, Zoe Lofgren, Doris Matsui, Tom Suozzi, and Mike Thompson. All of the aforementioned congressmen are representatives of the Democratic Party, except for Republican Jeff Fortenberry. Anna Hakobyan also had meetings with Los Angeles city officials.

Among the meetings with US legislature the following ones can be highlighted.

A group of Congressman, which are members of House Democracy Partnership of the House of Representatives, among other countries (Georgia, Ukraine, Moldova) also visited Armenia in 2019. The delegation included Republican and Democratic congressmen, but none of them were members of the Congressional Armenian Caucus. The initiators of the visit were members of the House Democracy Partnership (HDP). HDP brings together the U.S. House of Representatives with parliaments in emerging democracies to help strengthen legislatures. The partnership is a bipartisan, twenty-member commission of the U.S. House of Representatives that works directly with legislatures and parliaments in 17 partner countries around the world to support the development of effective, independent, and responsive legislative institutions. Armenia is not included in the list of partner countries.

During their visit to Armenia the congressmen invited Ararat Mirzoyan to visit Washington. The visit took place on 16 July, 2019, during which Ararat Mirzoyan participated in the Leadership Forum organized by House Democracy Partnership. Within the visit Ararat Mirzoyan met with the majority leaders of bicameral Congress- Democrat Speaker of the House of Representatives Nancy Pelosi and Republican Senate majority leader Mitch McConnell. A number of Democrat congressmen took part in the reception organized in honour of Mirzoyan’s visit to the USA-Eliot Engel, Frank Pallone, Jackie Speier, Judy Chu, Josh Gottheimer, Barbara Lee, Katherine Clark, Anthony Brindisi, Paul Tonko, David Cicilline, John P. Sarbanes, Raja Krishnamoorthi. At the moment, NA Speaker Ararat Mirzoyan’s meetings are considered to be the highest level meeting since the change of power.

The members of Armenian Caucus Jackie Speier, Judy Chu and Frank Pallone visited Armenia in October 2019 and met with the Prime Minister, the President, Speaker of the National Assembly, Foreign Minister, Minister of Defence of RA and other officials. Prominently, these congressmen visited Artsakh. However, the congressmen who visited Armenia, as well as Artsakh were solely the  representatives of Democratic Party.

The latest visit of legislative representatives to the US was on November 11-16, 2019 , which was the first visit of the US-Armenian Friendship Group to the US led by Lilit Makunts. As already mentioned, Armenia is not an HDP partner country and is not included in the list of parliaments of the 17 countries that are HDP partner countries. During the visit, the Armenian delegation met with Chairman of the HDP commission Congressman David Price and Congressman Co-Chair Vern Buchanan. According to the Armenian delegation, some steps are already being taken to make the Armenian parliament a partner of this commission. Cooperation with the bipartisan House Democracy Partnership commission, as noted by  members of Armenian delegation, is also important to secure bipartisan cooperation, as Armenia’s scope of cooperation with the US parties has so far been largely focused on the Democratic party. In this regard, it is also notable that the scope of November 11-16 meetings was not limited to Democrats only, but there were also meetings with two Republican congressmen, Vern Buchanan (HDP co-chair) and Chris Smith (senior member of the House Committee on Foreign Affairs).

Lilit Makunts and her delegation also visited think tanks, such as the German Marshall Fund, the American Foreign Policy Council, and the International Republican Institute (IRI).

Speaker of the National Assembly Ararat Mirzoyan visited the Atlantic Council (a centrist research center), where he delivered a speech. The Speaker of the National Assembly also met with the Governing Board of the National Endowment for Democracy (a private foundation largely funded by Congress, which provides grants for non-governmental organizations pursuing democratic goals in other countries). In addition, at the Armenian Embassy to the United States, Ararat Mirzoyan received the Vice President of the International Republican Institute (a non-partisan organization promoting democratic values funded by the State Department, USAID and NED).

Thus, 2018-2019 Armenian-American relations can be summarized as follows:

No meetings or phone conversations took place between Nikol Pashinyan and Donald Trump. This is because of the lack of a substantive agenda between the two countries. However, attempts were made to organize a bilateral meeting, particularly in 2018, a group of US congressmen sent a letter to President Trump calling him to accept Prime Minister Pashinyan. The meeting probably did not take place, as congressmen addressing President Trump were mostly Trump’s Democrat opponent congressmen. At the same time, in 2018 the Armenian Foreign Ministry spokesman stated that there was an intention to organize a Trump-Pashinyan meeting and noted that “such discussions are now taking place.”

It is also important to emphasize that within the framework of his regional visit, John Bolton called Azerbaijan and Georgia “strategic partners”, whereas Armenia a “high priority state.” That is, Georgia and Azerbaijan are strategic partners for the United States, while Armenia is a strategic “interlocutor.” It should also be noted that although no meeting was held between the Presidents of Azerbaijan and the United States, bilateral meetings were held in the format of the Minister of Foreign Affairs and Secretary of State, as well as the Minister of Defense and the Secretary of Defense. Aliyev had only one phone conversation with Trump on latter’s election as president.