Fight for Presidency: Money for Rating 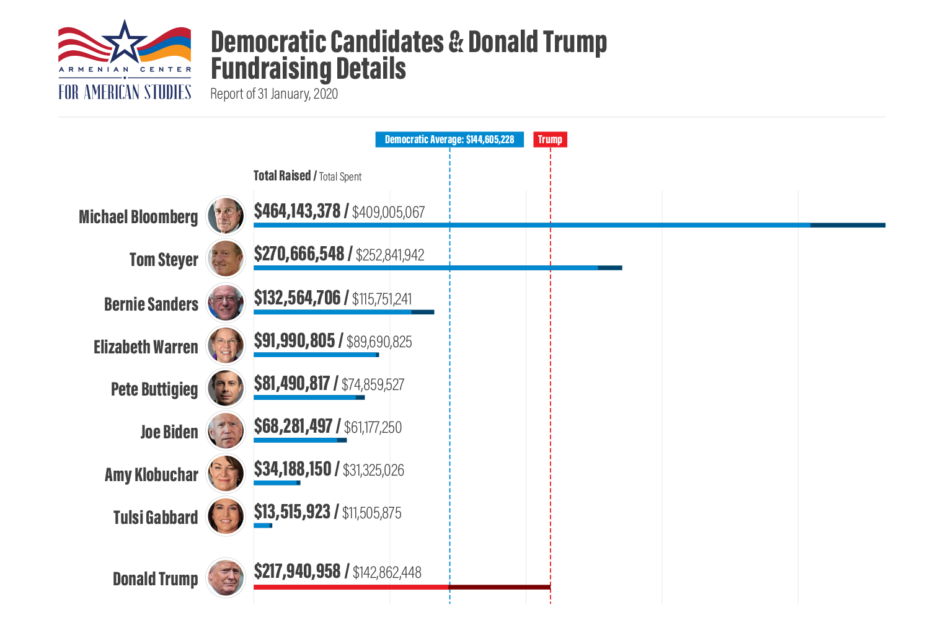 Following a convincing victory in the Nevada caucus (46.8%), presidential candidate, Senator Bernie Sanders has strengthened his position in the national polls as well. According to the latest polls, the leading Democratic candidate is Bernie Sanders (28%), Elizabeth Warren (19%) is the second, Joe Biden- third (17%). They are followed by Mike Bloomberg (13%), Pete Buttigieg (10%) and Amy Klobuchar (5%).

Whereas former Vice President Joe Biden almost always topped the polls in the past, now that picture has changed after three primaries (Iowa, New Hampshire, Nevada). Still his worst result was recorded in the New Hampshire primary, finishing fifth, which was a defeat for his campaign. According to the current data (as a result of elections in 3 states) Joe Biden managed to receive 15 delegates (securing 3rd place), with Pete Buttigieg having 26 and Bernie Sanders- 45.

Joe Biden attributes his results to the fact that the overwhelming majority of African Americans have not  voted yet, and Biden has a strong backing among them. However, African Americans’ support for Biden is also decreasing; in an average of national polls, Biden’s support among black voters has dropped about 12%  from before the Iowa caucuses to the post-New Hampshire period, while support for Bloomberg and Sanders increased by 10% among African American voters.

Besides, Biden does not have enough funding to compete in critical states with candidates such as Mike Bloomberg and Tom Steyer, who spend hundreds of million dollars on advertising in those states. It is noteworthy that these two billionaires have spent $409 million and $252.8 million, respectively, according to the report by January 31, 2020. As for the expenditure these two billionaires are followed by Bernie Sanders-  $115.7 million, Elizabeth Warren- $89.7 million and Pete Buttigieg- $74.8 million. Surprisingly, former Vice President Joe Biden, unlike other candidates, was able to raise less money and with his expenditure of $68 million Biden surpassed only Amy Klobuchar- $31.3 million and Tulsi Gabbard- $11.5 million.

The upcoming primary elections will be held in South Carolina on February 29, where 54 delegates of the State will be distributed among the candidates. Next Tuesday, March 3, there will be a “Super Tuesday,” when the greatest number of US states hold primary elections and caucuses. It means that everything is still ahead, and candidates are still able to improve their positions, as the candidates need a minimum of 1,991 delegates out of 3,979  to become a nominee for the US Democratic Party during Democratic National Convention. The votes of 3,878 delegates are still not distributed and candidates have the opportunity to contest those votes.