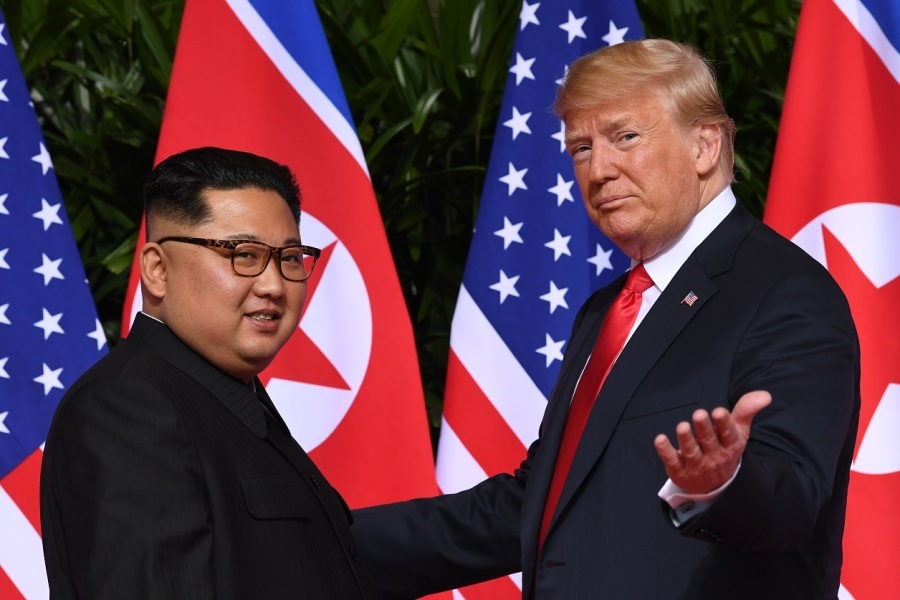 To understand US 45th  President Donald Trump’s strategy of bringing his political opponents to the negotiating table, it is first necessary to understand Trump’s character traits as a negotiator. Both as a successful businessman and as a politician, Trump has his unique way of negotiating, which is called Trump-style  negotiation.

Trump is a competitive negotiator. Moreover, some experts consider him to be not just competitive but rather hypercompetitive, which John Houston and his colleagues describe as “an extreme form of competitiveness representing an indiscriminate need to win at all costs.”

Trump himself describes his style of negotiation in his book “The Art of the Deal” as quite simple and straightforward: “I aim very high, and then I just keep pushing and pushing and pushing to get what I’m after. Sometimes I settle for less than I sought, but in most cases I still end up with what I want.”

One of the important elements of Donald Trump’s strategy is having a leverage at hand. According to Trump, “the best thing you can do is deal from strength, and leverage is the biggest strength you can have. Leverage is having something the other guy wants. Or better yet, needs. Or best of all, simply can’t do without.”

Trump’s negotiation style was described in the book of his 30 year lawyer Geroge Ross- “Trump-Style Negotiation: Powerful Strategies and Tactics for Mastering Every Deal”, where he stated that ‘’Trump style negotiation is a tough game; he plays hard and plays to win’’. According to Ross, Donald Trump ‘’has no negotiating weaknesses except maybe the fact that he doesn’t like to discuss minor details’’.

In his book, George Ross identifies a type of negotiator whom he calls “Ivan the Intimidator”. The negotiating style attributed to the latter is quite similar to that of President Trump. This type of negotiator comes from positions of power, intimidating and controlling the other to achieve his goal. Another peculiarity of “Ivan the Intimidator” is that such negotiators change like night and day depending on what they need or the atmosphere they want to create at the moment.

Often they are nice (or at least pretending to be nice), so that the other person thinks or does what they want. These qualities can often be seen in President Trump’s negotiating strategy. In particular, this is evident in Trump’s rhetoric against political rivals and in his habit of giving them nicknames. This results in its competitors responding in the same way, thus engaging in the game on Trump’s terms. This was especially noticeable during 2016 presidential elections in the competition among Trump and the other Republican candidates. Similar trick is used by Trump in case of North Korean leader Kim Jong-Un.

From Business to the Governing  a State

It is noteworthy that the strategy and tactics Trump applied in business negotiations he also adopted for the political arena. There are many examples of the tactical steps that Trump took in case of Canada, Mexico, China and other states to create a more favorable business environment for American business in trade relations with those countries. But there are some important features as to how Trump’s business negotiations have turned into Trump’s foreign policy. A vivid example of this is the North Korean crisis. It is important to note that by 2019 there have been no meetings between US and North Korean leaders, and former US presidents have failed to bring North Korea to the negotiating table.

Overall, the strategy applied to North Korea is the only one of military-political nature that has achieved Trump’s desired goal- to sit at the negotiating table. Although there is no final result yet, it should not be excluded that  Trump will show results in terms of this weeks before the election, thereby gaining additional dividends in the domestic political arena.

The North Korean policy Trump starts with threats and harsh statements (often reflected in the so called “Twitter diplomacy”) coupled with already practical steps: deepening sanctions, deploying naval forces, exerting pressure through China, up to officially recognizing North Korea as a state supporting terrorism (lets remember again that this very tactic Trump bore in mind by saying that the best thing a person can do is to come from the position of power and the leverage is the biggest power that one can have).

One of the most important tools for Trump’s negotiation strategy in case of North Korea is the president’s Twitter posts. According to President Trump, if he does not use this platform, “unfair, fake and corrupt’’ media will distort his words. A few days before his inauguration, Trump tweeted that “North Korea just stated that it is in the final stages of developing a nuclear weapon capable of reaching parts of the U.S. It won’t happen! ” In another post, in response to Kim Jong-Un’s statement that the nuclear button is on his desk, Trump announced, “Will someone from his depleted and food starved regime please inform him that I too have a Nuclear Button, but it is a much bigger & more powerful one than his, and my Button works!” In another publication the president stated ‘’ Kim Jong Un of North Korea, who is obviously a madman who doesn’t mind starving or killing his people, will be tested like never before! ‘’ This is by the way related to the assertion that by saying leverage, Trump means something ‘’the other guy wants. Or better yet, needs. Or best of all, simply can’t do without.” Naturally, this in its turn relates to North Korea’s overall economic situation and extremely high level of poverty, which can be eliminated only if the US lifts sanctions against North Korea and the two countries start cooperating. It is not a coincidence that Trump mentioned in one of his interviews that if North Korea comes to an agreement with the USA, it will eventually become a strong country, while calling that North Korean people ‘’so hard-working, so industrious’’. Thus, Trump links the development of North Korea’s economy with the improved relationships between the latter and the US, even pointing out that ‘’maybe in the not-too-distant future, it will be something like South Korea’’

Tougher threats Trump voiced from the UN in 2017, where he addressed Kim Jong-Un as a “Rocket Man” for the first time (in Trump’s habit of giving nicknames to his opponents), noting in particular: “The United States has great strength and patience, but if it is forced to defend itself or its allies, we will have no choice but to totally destroy North Korea.  Rocket Man is on a suicide mission for himself and for his regime.”

Part of President Trump’s tough policy became April 9, 2017, when the US sent an aircraft carrier and several other warships toward the Korean Peninsula in response to testing of another intermediate-range missile by North Korea just 4 days before. A few days later, the largest US missile submarine arrived at the South Korean port. These steps were unequivocally directed against North Korea and represented a show of force. After making the situation extremely tense, Trump, realizing that Kim Jong-Un has no alternative, declared his readiness to start the dialogue with him.

As already mentioned, one of the key components of President Trump’s negotiation strategy is the leverage which he skillfully uses against his opponents. The next leverage against North Korea, which could weaken that country and force it to sit at the negotiating table with the United States, is China. It is no secret that North Korea’s economy is heavily dependent on China, and Donald Trump is using it against North Korea in an attempt to weaken the Korean economy which is already in a difficult situation. China is North Korea’s major economic partner. Beijing also provides direct aid to Pyongyang primarily in food and energy assistance. Moreover, China announced that it will support Pyongyang in the event of an attack, but will not take any action if Pyongyang strikes first.

Donald Trump started to use this fact against North Korea still being in the first year of his presidency, prompting China to impose sanctions against Pyongyang.

In the same year China joined some international sanctions, in particular stating that there will be no imports of coal, iron, lead, aluminum, zinc or copper from North Korea. Some years later in 2020 Trump mentioned that China has been ‘’very helpful’’ with respect to the negotiations with the North Korean leader.

It is notable that President Trump’s strategy worked in the case of North Korea, as he achieved his goal by bringing the Pyongyang leader Kim Jong-Un to the negotiating table, even more than once. The first negotiations between the leaders took place  in Singapore on June 12, 2018. The second meeting was held in Vietnam on February 27-28, 2018, but this meeting failed as the sides could not come to an agreement concerning the issues of sanctions and denuclearization. The interrupted negotiations resumed, when on June 30, 2019 the leaders agreed to meet in the demilitarized zone separating North and South Koreas. By crossing the North Korean border, President Trump has became the first acting US president  to step up to North Korea. Among the former presidents of the United States, Jimmy Carter is the only one who visited North Korea in 1994, but unlike Donald Trump, he was no longer the US president at that time.

Right after the negotiations Trump started using the method of so called “carrot and stick”, especially after 2018 summit Trump regularly refers to the good relations among him and the North Korean leader, calling him “smart” and even going so far as to say that he and Kim Jong Un “fell in love.”

Thus, Trump’s negotiating strategy on North Korea is a militarily-political important example, because first by using threats, then by concrete actions, and by using China as an additional lever, the US President succeeded in bringing Kim Jong-Un to the negotiating table. Again, it is not excluded that Washington and Pyongyang have already come to some agreement, but will announce it in the months or weeks before the US presidential election.

As for the success of Trump’s negotiating style in the economic field, the two newly signed agreements are proof of this: the first is the US-Mexico-Canada (USMCA) and the other is the US-China trade agreement.

Presently, President Trump is pursuing the same tough and threatening policy on Iran, but in this case it seems unlikely to bring Iran to the negotiating table with the North Korean scenario, especially given the US presidential election in November. President Trump, despite his impeachment, has good chances of being re-elected, and his success on Iranian issue would improve his positions even further. It is unlikely that Iran would do such a favor to Trump, that is to sit at the negotiating table with the United States.