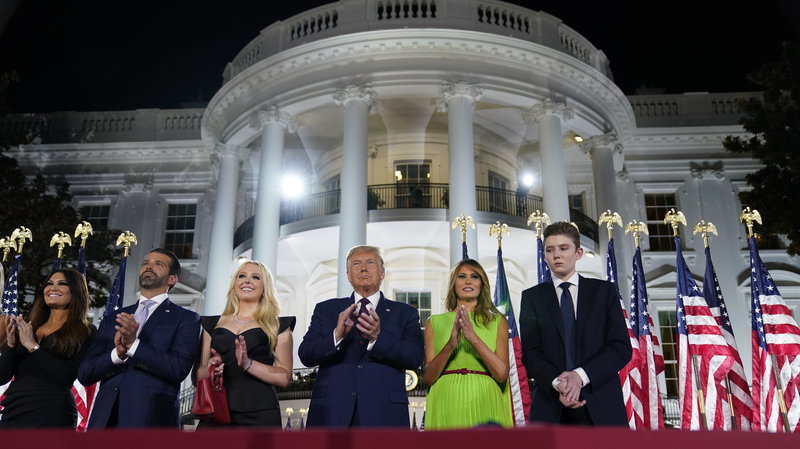 The Republican National Convention took place from August 24 to 27. Initially it was planned to hold a traditional in-person gathering in Charlotte, however in June the party moved most of the convention to Jacksonville, Florida after clashing with North Carolina’s governor over coronavirus restrictions. Then, in late July, Trump canceled the Jacksonville convention as the number of people infected in the state increased. After that the party turned to a digital version. Some conventional proceedings, though drastically reduced in scale, took place in  Charlotte, such as “”small, formal business meetings.” However, because of the restrictions not all the delegates attended the convention. Traditionally about 2500 delegates attend. This time they were only 336, one for every six delegates.

The Republicans started their National Convention with a series of speeches that focused on the success of President Trump’s first term. Former U.S. Ambassador to the United Nations Nikki Haley insisted that Trump “has earned four more years as president,” praising his relations with China and military success against ISIS. The evening was dominated by Anti-Democratic rhetoric, during which the speakers criticized Democratic presidential candidate Joe Biden and the Democratic party. During one of the most memorable speeches of the evening South Carolina Senator Tim Scott stated that Biden “would turn our country into a socialist utopia.” As the only black Republican in the Senate, Scott also criticized Biden’s criminal justice record and the Democrats’ policy response to the racial unrest over the killing of George Floyd. The eldest son of President Donald Trump Jr., was also among the critics of Joe Biden as he stated in his speech. “Joe Biden and the radical left are also now coming for our freedom of speech and want to bully us into submission”.

The second day of the Convention began with President Trump attending the naturalization ceremony, where he personally addressed new U.S. citizens who had immigrated to the United States from Lebanon, Bolivia, India, and Sudan. Trump, who has been accused of being anti-immigrant for his tough stance on illegal immigration, used the moment to emphasize his support for those entering the country legally. “You followed the rules, you obeyed the laws, you learned our history, embraced our values, and proved yourselves to be men and women of the highest integrity…It’s not so easy. You went through a lot. And we appreciate you being here with us today.”

During the second day of the Republican National Convention, Secretary of State Mike Pompeo made a speech. The speech was filmed in Jerusalem beforehand. Pompeo stated that President Donald Trump’s “America First” policy has brought positive benefits to the whole world from holding China responsible for its role in the coronavirus pandemic to defeating Islamic State. Pompeo’s decision to deliver a speech at the convention was criticized by diplomats and democrats of Congress, who declared that they would consider whether his presence at the political event was legal. Aides to Pompeo defended the presence at the convention, saying that he was acting as a private person and that no government resources had been used.

The key speaker of the third day of the convention was Vice President Mike Pence, who underlined the success of the Trump administration and criticized the Democratic nominee Joe Biden. The Vice President noted that Trump will bring the U.S. economy back to its pre-pandemic height if he is given 4 more years in office. According to the Vice President, “When you consider their agenda, it’s clear: Joe Biden would be nothing more than a Trojan horse for a radical left…The choice in this election has never been clearer and the stakes have never been higher.”

The third night of the Republican National Convention featured a keynote address by Vice President Mike Pence that highlighted the Trump administration’s successes and attacked Democratic nominee Joe Biden. Vice President Mike Pence took centre stage to make the case that Trump will bring the US economy back to its pre-pandemic heights if given four more years in office. “When you consider their agenda, it’s clear: Joe Biden would be nothing more than a Trojan horse for a radical left,” he claimed. “The choice in this election has never been clearer and the stakes have never been higher.”

The Republican National Convention ended on August 27, and the fall campaign officially begins following President Donald Trump’s official acceptance of the Republican presidential nomination to fight for a second term. He made a speech from White House South Lawn.

Senate Majority Leader Mitch McConnell also made a speech on the last day of the Convention, praising President Trump, saying that Trump has made his mission to make the lives of Americans more prosperous. Meanwhile, according to him, “Today’s Democrat party doesn’t want to improve life for middle America”.

The daughter of the U.S. President Ivanka Trump, also delivered a speech during the final evening, describing her father as “the people’s president.”

The Republican National Assembly ended with an hour-long GOP Nomination Acceptance Address by President Trump. The President spoke in front of about 2,000 supporters who had been invited to the White House.

Trump particularly mentioned that “this is the most important election in the history of our country.” According to the president, “at no time before have voters faced a clearer choice between two parties, two visions, two philosophies, or two agendas. This election will decide whether we save the American dream, or whether we allow a socialist agenda to demolish our cherished destiny. ” President Trump noted that “the Republican Party will remain the voice of the patriotic heroes who keep America safe.”

Biden, whom the president described as a “trojan horse for socialism,” naturally came under fire. Moreover, according to Trump, “if you give power to Joe Biden, the radical left will defund police departments all across American. …No one will be safe in Biden’s America.”

The President also referred to the fight against the coronavirus, noting that “we launched the largest national mobilization since World War II. We produced the world’s largest supply of ventilators. We shipped hundreds of millions of masks, gloves and gowns to our front line healthcare workers…we will have a safe and effective vaccine this year, and together we will crush the virus․”