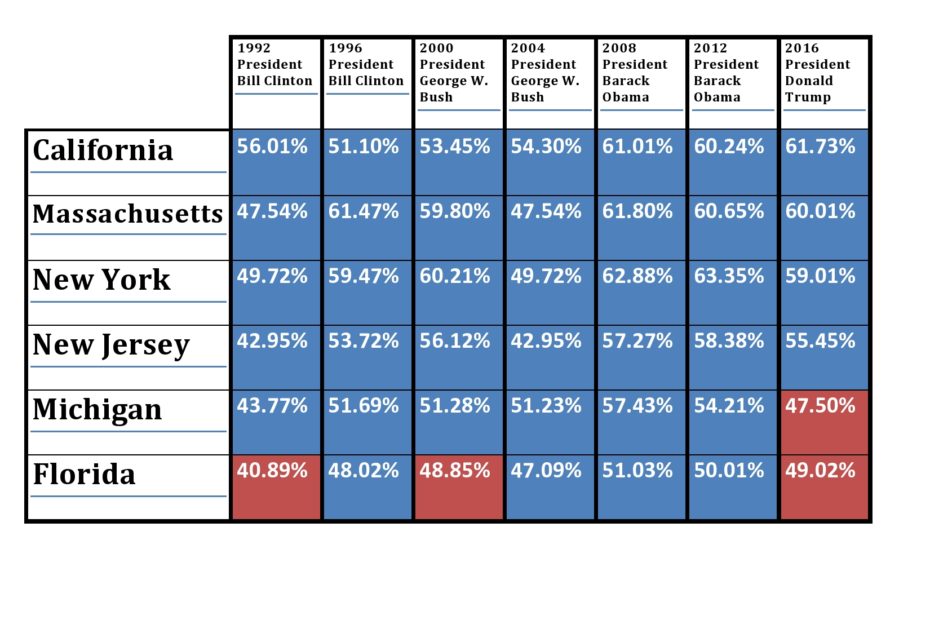 Every election in the USA is accompanied by coloring the USA map into blue and red. The coloring of the US map is not a recent phenomenon, but the colors were not consistent then and have gained their current significance and usage since the 2000 presidential elections․ Now red states are associated with the Republicans and blue states with the Democrats. However, some states are not steadfast in their choice and can vote for Republicans in one election and for Democrats in another (swing states).  Among the traditional blue states are California, Connecticut, Hawaii, Illinois, Massachusetts, New Jersey, New York, etc. Among the red states are Alabama, Texas, Georgia, Montana, Arizona, etc. Among the swing states are Colorado, Florida, Iowa, Michigan, Minnesota, Ohio, Nevada, New Hampshire, etc.

Now let’s see where the Armenian community is located in this blue-red state division. The number of Armenian population is differently estimated by different sources. According to U.S. Census Bureau, 2017 American Community Survey 1-Year Estimates (annual survey conducted among selected 3.5 million addresses) Armenian population in the USA is 485.970 (+/- 18.396). However, according to some Armenian sources the population is 1.2 million and even reaches 2 million.

One reason why the number of Armenian population in American Community Survey is so underestimated can be the fact that in the USA the more comprehensive decennial Census does not include the category of some ethnic groups, including Armenians. Though there was a plan to add the ‘’Middle Eastern or North African’’ category which would also allow to choose ‘’Armenian’’ as nationality and provide a more detailed and credible Demographic statistics, the Census Bureau announced in January 2018 that they would proceed with the same question format used in the 2010 Census with the exclusion of more detailed categorization. And this time again the people of Armenian origin are highly likely to choose the category “White” without having a chance to choose their nationality. However, as the only official data available is the one provided by American Community Survey, our research will be based on the data provided by this survey.

Thus, by comparing this data with above mentioned blue-red states, it becomes apparent, that Armenians mostly reside in blue states. This in its turn sheds light on the fact why Armenians have traditionally stronger ties with the Democrats rather than the Republicans, and why Armenian lobbyists are more successful in cooperating with Democratic Senators and Representatives.

If we take the 1992 presidential elections as a starting point (since the establishment of diplomatic relations between US-Armenia and also the 2nd wave of Armenians’ migration to the US), we can see that California, Massachusetts, New York and New Jersey (states with the most Armenian population) are pro-Democratic. However, among states with large Armenian population, the two-Michigan and Florida, are swing states. But the number of Armenians in these states is so minute, that their votes won’t have enough weight in the elections.

It is well known that Trump in the 2016 presidential elections won through Electoral College but not through popular vote. The difference between the popular votes of the two candidates was 2,868,691 in favor of Hillary Clinton. Though Trump has the chance to win the 2020 presidential elections again through Electoral College where the Armenian votes in traditionally blue states won’t have a significant impact on the results, they can help him to fill in the gap of popular vote and to come closer to being the absolute winner, especially when we take into account the fact that the Armenian community in America can be much larger than is stated in American Community Survey (we mean much more than half a million).