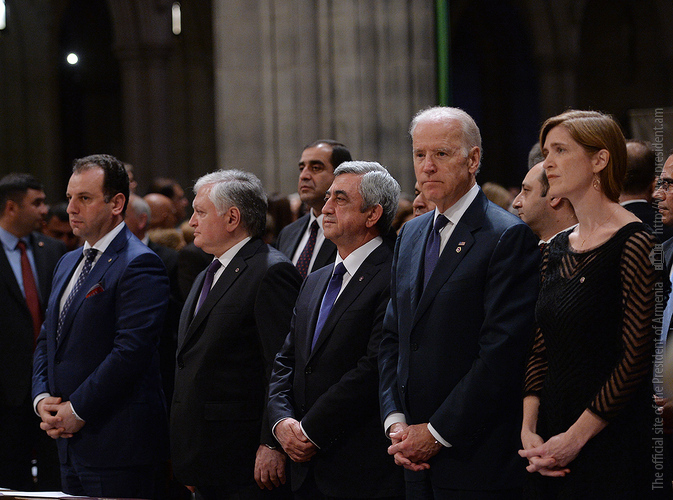 The 46th US President Joe Biden has actively participated in the passage of resolutions condemning and recognizing the Genocide since he was a Senator. Starting from 1984, Senator Biden has co-sponsored a number of resolutions connected to Armenian Genocide introduced by other Senators. Moreover, back in 2007 Biden introduced a resolution condemning the murder of Turkish-Armenian journalist and human rights advocate Hrant Dink. The same year in response to a question from LA Times on Armenian Genocide resolution (S.Res.106) Biden said: “I support it, and the reason is simple: I have found in my experience that you cannot have a solid relationship with a country based on fiction. It [Armenian Genocide] occurred. It occurred.”

The situation changed when Barack Obama became US President and Joe Biden took the office of the US Vice-President. In 2008 Obama promised that: “​​As a senator, I strongly support passage of the Armenian Genocide Resolution (H.Res.106 and S.Res.106), and as President I will recognize the Armenian Genocide…America deserves a leader who speaks truthfully about the Armenian Genocide and responds forcefully to all genocides.” Meanwhile when he got elected as the US President, not only did Obama not recognize the Armenian Genocide but he also hindered the efforts of the Congress on that issue with the reasoning of the reconciliation of the Armenian-Turkish relations. In this regard, there had been a remarkable incident with Joe Biden. On October 26, 2010 a video was disseminated, where Biden talking to a guy about US-Armenian Protocols mentioned that Armenian President Serzh Sargsyan had called and told him that “’not force this issue now while we are in negotiations.” This was immediately followed by the response from the Armenian side, more specifically the Press Secretary of the RA President Armen Arzumanyan said: “The President of the Republic of Armenia has never called US Vice-President Joe Biden. On the initiative of the latter, two telephone conversations took place in 2009, during which the President of the Republic of Armenia did not use the phrase attributed to him directly or indirectly in the video…Confident that the White House has at its disposal the transcripts and recordings of all the official telephone conversations of the US Vice-President, the Office of the President of the Republic of Armenia officially gives its consent to publish the recording of the mentioned telephone conversation.” Despite this, nothing was revealed by the White House. However, on October 30 the US Embassy in Armenia published a statement confirming that this issue was not touched upon. The statement reads:  “Instead, the discussions between Vice President Biden and President Sargsyan that were recently referenced…were about the need to take immediate steps to improve Armenian-Turkish relations…the two leaders agreed that there should be no preconditions to normalizing relations between Armenia and Turkey.” Anyway, 5 years later Vice-President Biden took part in an ecumenical prayer in memory of the Armenian Genocide victims, performed at Washington National Cathedral. From the Armenian side the president Serzh Sargsyan, His Holiness Karekin II, Supreme Patriarch and Catholicos of All Armenians, and Aram I, Catholicos of the Great House of Cilicia were present.

During 2020 Presidential Campaign the candidate Biden in the letter to the Armenian National Committee of America of September 16 wrote: “The United States must reaffirm, once and for all, our record on the Armenian Genocide… Failing to remember or acknowledge the fact of genocide only paves the way for future mass atrocities.” Already on April 24, 2020 presidential candidate Joe Biden promised to endorse the resolution recognizing the Armenian Genocide in case of being elected as the President of the United States.

On April 21, 2021 a news was spread in the American Media (the first were The New York Times, The Wall Street Journal) referring to US unanimous officials that on April 24 President Biden will recognize the Armenian Genocide in his speech.